A tribute to
Arlyn Maria Beal 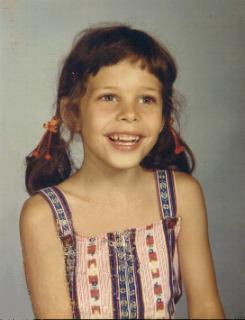 I would like to share with you a little about my daughter, Arlyn Maria Beal. I gave birth to her at 12:30 p.m. on Wednesday, January 25, 1978 at Archbold Memorial Hospital in Thomasville. When I held her in my arms, I believed she was the most beautiful little baby in the world. 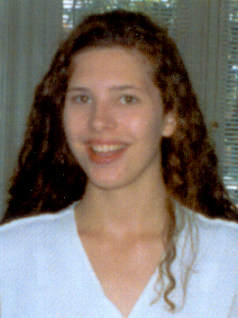 For eighteen years, six months and two weeks, Arlyn lived life with zest. She thrilled us, worried us, challenged us, entertained us, cared about us, and frustrated us.

Most of all though, Arlyn made us smile; she was our sunshine.
Then on Wednesday, August 7th, 1996, the sun stopped shining.

Arlyn ate lunch at home that day. She was in a quiet but pleasant mood. I noticed she didn't eat much, and she appeared to be tired, but she was an active teen-ager, so that did not seem abnormal.

After lunch, Arlyn showed me a dress she had bought, presumably to wear in the wedding of her friend, Misty. Then, she said she wanted to go visit her friends, Luke and Travis.

A few minutes later, 3 miles from our home, Arlyn held a rifle to her head and pulled the trigger. She left no note.

How does a child who seemed to have everything going for her end up this way?

Arlyn had a family that loved her infinitely. She was beautiful and intelligent; her sense of humor was remarkable. Arlyn was kind, a friend to anyone who would let her into his or her life.

She had a part-time job as a waitress at Quincy's, which she enjoyed. She had accepted admission to Tulane University in New Orleans, and the week before she died, she shared her schedule of fall courses with me enthusiastically. I reviewed these facts over and over in my mind, trying to discover why she would not see how lucky she was, but I could not find an answer.

From the time she was a little girl, Arlyn has brought joy and laughter into the lives of others. When she was little, she sucked her thumb. She was nurturing; she carried her teddy bear with her everywhere. One of her greatest pleasures was dressing up in beautiful long dresses; she dreamed of being Miss America one day. Arlyn and her friends often put on plays for us on the stage in our living room.

When Arlyn was 12, I remember her goal was to grow up, finish college, find a husband, and build a house in our back yard with a covered walk way to our door, so we could be together forever.

At home, Arlyn was loved unconditionally. She knew she was safe. In the real world, however, Arlyn did not always fare as well. I remember her crying when she was very little, hurting because other little boys and girls would make fun of her. She told me they said she was ugly.

When Arlyn got in middle school, she tried desperately to conform, but all she seemed to receive was rejection from her peers. Arlyn was very lonely.

In spite of any personal problems, Arlyn was an outstanding student. She loved school more than anyone I have ever known. The teachers she respected the most were those who managed to challenge her mind.

In 8thth grade, she decided she wanted to be valedictorian, even though there were quite a few other students ahead of her in the ratings at that time. She started the climb, and soon found herself in first place. All through 10th and 11th grades, Arlyn was number 1.

In her senior year, Arlyn was selected as the "Most Intelligent Senior Girl."

That year, her behavior became more out of character. She marched to the beat of a different drummer and challenged the system in minor ways. She learned a hard lesson; a minor lapse in maturity can result in a major punishment. Because of that, her grades plummeted, and she lost the drive to excel. When she graduated, she was number 6.

At some point, Arlyn reconciled herself to the fact that she was different from her classmates, so she decided to assume that role of being unique with enthusiasm. In high school, her reputation for dressing in ways no one would expect was wide-spread. In some classes, the students always knew to expect the unexpected from Arlyn, but the truth was that it was a cover. My child was hurting inside, and each day, the feeling of loneliness she experienced added another layer to the pain.

After Arlyn died, Ronnie told me about a conversation he had recently had with Arlyn. She told him about things she had done that she was not proud of. She had smoked cigarettes, she had smoked pot, and she had decieved us about other things. She said she was going to stop those things, that she had things under control.

Arlyn also told him she had been raped. Raped by a boy she had trusted implicitly. Raped when she was just 15.

Several months after the rape had happened, Arlyn told me she had been intimate with this boy, but she insisted he had not raped her. She told me that she was afraid he had given her AIDS.

I took my little girl to be tested for AIDS and other sexually transmitted diseases. That was traumatic for both of us. It was only in her talk with her father two weeks before she died that she admitted she had not told us the truth, that the young man had raped her.

Apparently, being raped by a boy she cared for was the beginning of the end for my child. From then on, Arlyn was not herself. She began to engage in self-destructive behaviors, and she did what she could to escape from the emotional pain that resulted.

To make things worse, Arlyn did not know (nor did we) that she suffered from bipolar disorder. Adding a trauma like sexual violence to the life of a young, vulnerable little girl who was already struggling with internal demons she could not identify could only result in unbearable pain.

Arlyn's father and I have come to terms with the fact that Arlyn died a tragic death because we understand now that what she did was beyond our control, and it was beyond her control. Her suicide was an external response to an internal condition; it was not a 'choice.'

We will mourn forever for the beautiful child we loved so deeply She was our precious, fragile, sensitive, bright and funny -- Arlyn, Darlin'.

When you think of Arlyn, remember the sweet little girl who had a hunger for knowledge and a desire to be seen. Remember her smiles and her laughter. Remember that she is now at peace.

Please direct all comments on page design to:
Webmaster